Located at the southern end of Migjorn beach, Es Caló des Mort is one of the most beautiful spots of this part of the island.

✅ Tiny cove located at the southern tip of Migjorn.
✅ To access it you have to walk the coast.
✅ White sand and crystal clear waters.

Es Caló des Mort is located at the southern end of Migjorn beach, next to Es Cupinar beach.

The ideal way to access it, if you go by motorcycle, is to drive along the path that surrounds the Casablanca restaurant on the left and following the indications on the road.
Parking space is very scarce, and the road is the access to several houses in the area, so respect the space necessary to continue circulating correctly on the road so as not to create problems by blocking traffic.

If you are going by car, I recommend that you park your vehicle in the Maryland area or the Hotel Riu La Mola, and arrive on foot, bordering the beautiful stretch of coastline in this part of the island.

The point of view when arriving at the cove is beautiful and, in times of Instagram it has become especially “famous”.

Es Caló des Mort does not offer any type of service on the beach, it is a virgin cove in that sense.
There is no hammock rental, no lifeguard service and the closest kiosk where you can eat or drink is the famous Bartolo Kiosk about 500 meters away.
Therefore, if you decide to visit this beautiful and tiny cove, remember to take everything you think you need as you can hardly get it once there.
In the same way, ask you to be extremely careful with the environment and do not leave waste of any kind in the cove or in the jetty huts in the area so that the next one who goes to enjoy Es Caló des Mort, finds it as you would have liked to find it .
This request is actually valid anywhere on the island.

Once again Instagram makes many actions and attitudes fashionable in different parts of the planet and in Es Caló des Mort there is one of these absurd customs that one day or another will have a sad end.

When you access the cove, as I said, you will go along the coast, which is elevated above the shore with a considerable height.
The land, in this part of the island, is made of sandstone, which wears out year after year producing landslides that can have fatal consequences if someone is at that time below ….. or above the area in question.

A ledge, upon reaching the cove, has become the balcony to which many of our visitors want to look out to be photographed from up there with the blue background of the waters of Formentera. 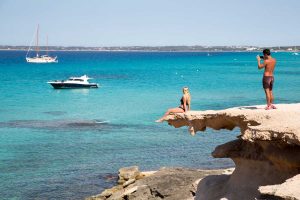 The point is that, one day or another, that ledge will break and the consequences will be disastrous if at that moment there is someone on top taking the photo, a thousand times previously taken.
It is true that the rock has looked the same for years and years and that it is still there, but I wanted to leave it written in case it serves as a warning to someone.

I don’t know if it’s worth gambling for a photo, that’s up to you.
And remember to tag us in your Instagram pictures when you´re in Formentera

Fortunately, the date of the collapse coincided with the state of alarm decreed throughout Spain due to the Covid19 pandemic.
Time in which the residents of the island could not leave our houses and time in which the arrival of tourists was prohibited.
The luck for both residents and visitors was that the destination chose the dates of the total confinement of the population to end the geological life of that sandstone formation.

This completely random event in time meant that, since there was no one in the vicinity, no one was injured by the collapse, something almost miraculous considering the thousands of people who year after year took the risk in exchange for a photo.
There will no longer be any more photos of that point on the Formentera coast.

If you are one or one of the thousands of people who have photographed themselves at that point on the Es Caló des Mort coast in recent years, that photo will no longer be repeated by anyone else. Keep it as a treasure and value the risk you took in its day.

Where does the name Es Calo des Mort come from?

There is no historical toponymic reference that tells us since when this beautiful stretch of the Formentera coast received the name of Es Calo des Mort but the olders of the islande say that on at least one occasion, although they may have been more along the history of the island, the floating corpse of a man appeared and that as a result of that discovery the cove was renamed Es Caló des Mort, the cove of the dead.

There are people who name it in the plural, Calo des Morts, but not it is right. The name of this idyllic cove is singular, Es Calo des Mort.

The currents of the Mediterranean Sea create corridors of “regular traffic” and it should be noted that, on more than one occasion, especially after great storms such as the Storm Gloria at the end of 2019, this part of the island of Formentera, but the entire Migjorn area in general, can pick up the odd “surprise” on its shore.

As in many areas of Formentera where the shelter of the coast offers protection to traditional fishing boats, in Es Caló des Mort you will find a set of “escars”, the name as the boathouse huts of fishing boats in Formentera are known.

Normally built with wood from the island such as junipers or pines, currently not all of them enjoy the maintenance and conservation that such characteristic elements of the island deserve but they must always be constructions that visitors must respect and not use as a garbage discharge point.

These spaces house boats that are much loved by their owners and at the same time offer shady areas that are very appreciated by bathers in the hours when the sun is strongest, so if you are one of those who like to take a nap in the shade of the Es Caló des Mort “escars” or any other on the coast of Formentera, always do it with respect and not leaving any type of garbage when leaving.

From these lines, the 4mentera.com team, we thank you for your understanding and collaboration in maintaining the cleanliness and beauty of such beautiful places as this one.