Es Caló is the small urban area that has grown around the fishing boat huts and is, around them and its pier, where the life of this idyllic village revolves.

✅ Traditional fishing port on the west coast of the Formentera.
✅ Its traditional boat huts are protected as a traditional element of the island.
✅ In the eleventh century, the Augustinian monks of La Mola gave the place its name.

Although the official name of this urban nucleus of Formentera is, Es Caló de Sant Agustí, everyone on the island knows it as Es Caló, without the tag that refers to the saint.
The reason for Es Caló being linked to a saint despite the fact that there is no church in the town, is because in the 11th century there was an Augustinian monastery in La Mola that used this small bend between the rocks as a natural port from which to set sail for Ibiza or receive goods from the neighboring island.
That is why, since the 11th century, Es Caló has been linked to the patron saint of the Augustinian order, San Agustín. 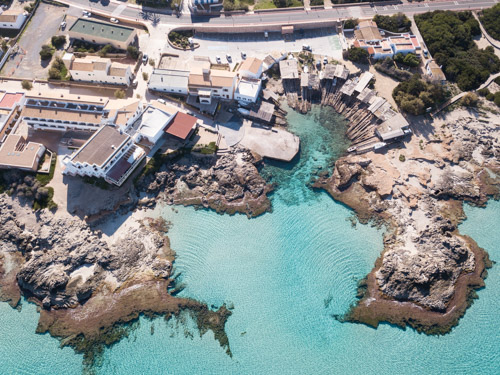 Es Caló is a small urban nucleus that you will find at kilometer 12 of the main road, PM-820, when you head south from the port of La Savina.
The group of houses and buildings is small and daily life takes place in the surroundings of the small dock of the port, where residents and tourists come to the sea to enjoy the wonderful panorama offered by the fishermen’s huts and the crystalline water of the Mediterranean.

Get off your car or motorcycle, parking in one of the areas enabled for it, and enjoy the place. You will not be able to stop taking photos and upload them to your Instagram profile, you will see, you will love it. 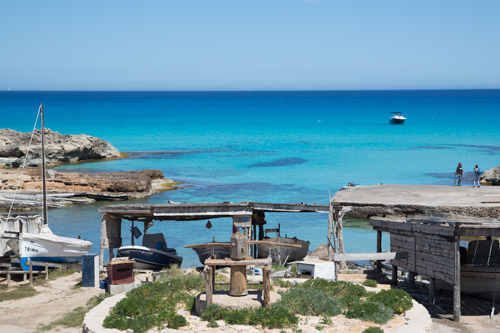 Es Caló has a limited range of bars, restaurants and shops, as well as hotel accommodation and … a pharmacy.
Es Caló has one of the (only 4) pharmacies in Formentera.
The constant commercial activity, from Monday to Sunday, during the summer months, disappears completely with the end of the tourist season and only the pharmacy remains open throughout the year.
It is at this time of the year when the residents of Es Caló return to their origins and fishing days are a constant if good weather permits. 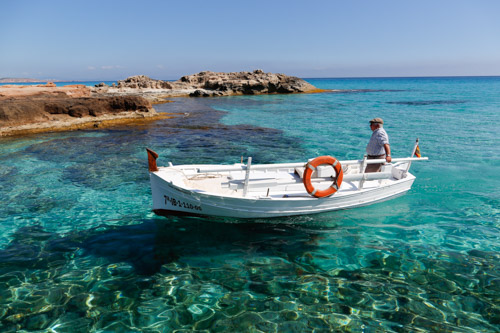 The closest beach to the town of Es Caló de Sant Agustí is Ses Platgetes, also known by many as Es Caló beach due to its proximity to the town, just over 200 meters away. 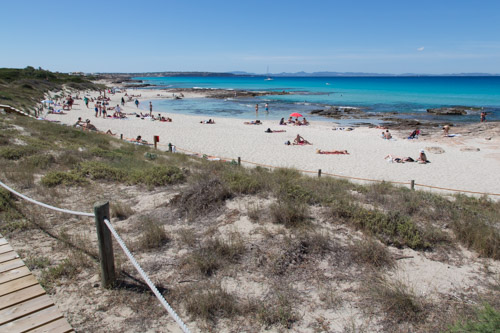 The truth is that the entire coast on both sides of the town is suitable for swimming.
In some sections you will find sand and in others rock, so you can choose where to immerse yourself in the crystal clear waters of Es Caló, Formentera.
Keep in mind that when the wind blows from the north direction, Tramontana, the beaches in this part of Formentera will suffer from waves and bad weather, so, on that day, it is better to bathe in any of the Migjorn beaches.
That, due to the peculiarity of being Es Caló at the narrowest point of Formentera, the distance from the beaches on that side of the island is minimal. Less than 2 kilometers.

In the summer of 2019, 11 swords were found buried in the sandy bottom of Es Caló, which went to the Archaeological Museum of Ibiza and Formentera for their recovery and restoration.
The first hypotheses of this find, still to be confirmed, speak of French swords from the 19th century used by cuirassiers during the Napoleonic battles between 1810 and 1815
Weapons of great size and weight that lead us to think about the possibility of the existence of a buried wreck a few meters from the coast of Es Caló in Formentera.
We will see that new discoveries will bring us future exploration campaigns in the area.

As we mentioned at the beginning, the patron saint of Es Caló is San Agustín and that is why on August 28 the town festivals are celebrated with a curiosity about it. Whether it coincides with the 28th or not, the party is celebrated on the last Saturday in August.
The tradition of celebrating this festival is relatively short since they began in 2007 thanks to the initiative of the neighbors.
For more than 10 years the festivities included concerts by local bands and djs but given the success and mass of the party, and the consequences that this had for the town and its neighbors, in 2018 it was voted that the parties were quieter and encouraging the traditions and culture of the island. 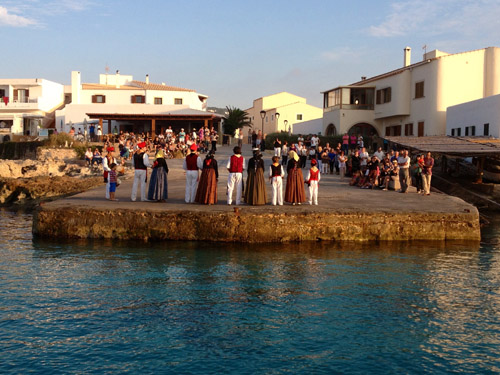 One of the culinary delights of Formentera is the Pagesa Salad, a salad that among its basic ingredients is the Peix Sec, dried fish.
Cartilaginous fish such as stingrays, which after being cut into strips, are hung in the sun so that, together with the sea breeze, they turn the pieces of fish into salting.

In Es Caló you will be able to see, every day of the summer, a certain amount of fish drying in the sun on the fishermen’s huts.
Peix Sec in process.
A tradition that is very much alive in this part of Formentera. 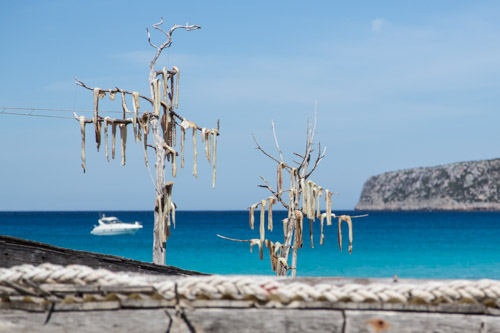