The main village and capital of the island, it has the biggest resident population and a large part of the Formentera government offices. Wide pedestrian areas with shops and restaurants.

✅ Capital of the island, its creation dates back to the 17th century.
✅ It hosts the headquarters of the Consell Insular de Formentera since 2002
✅ Wide offer of shops and restaurants

The town of Sant Francesc de Formentera is known among residents as, Sant Francesc.
During the repopulation of Formentera, which began in 1697 with the Ibizan Marc Ferrer, who obtained a concession from the royal house to settle in the then uninhabited Formentera.
Since the reconquest of the Pitiusas in 1235 and for several centuries, Formentera was uninhabited due to the harsh living conditions and the insecurity that existed then due to pirate raids.

The definitive repopulation of Formentera began in 1697 with Marc Ferrer from Ibiza, who obtained a concession from the royal house to settle on the then uninhabited island.
The small population of that time grew in the surroundings of the Capella de Sa Tanca Vella and already, in 1724, with the gradual increase of inhabitants, permission was requested to build what is the current church in honor of San Francisco and that will give name the town of Sant Francesc de Formentera.

In the surroundings of the town we find several flour mills in the Sa Miranda area whose construction dates back to the beginning of the creation of Sant Francesc de Formentera as a town and a stable population center.
In the same way, and if you are interested in the ethnography of the island, in one of the most central streets of Sant Francesc, you will find the Ethnographic Museum of Formentera where you can enjoy a wide collection of pieces of high historical value that will help you imagine how It was the Formentera of the years prior to the arrival of tourism. 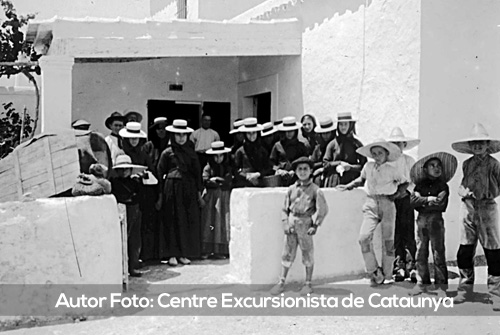 Formentera has always had Sant Francesc as its capital on the island, the town where the governing and management bodies have always settled.
Since 2007 Formentera is governed under the figure of the Insular Council and, under the name of Consell Insular de Formentera, Sant Francesc houses its headquarters.

The central building of the Consell de Formentera is located in the same square as the church and is easy to identify since it has the 3 flags hanging from the masts of its facade.

Right next to the headquarters of the Consell Insular de Formentera is a small and discreet tourist information office on the island.
Located in a historic building in the town, you can have information, maps and answer any questions you have, or that we have not solved from this website. 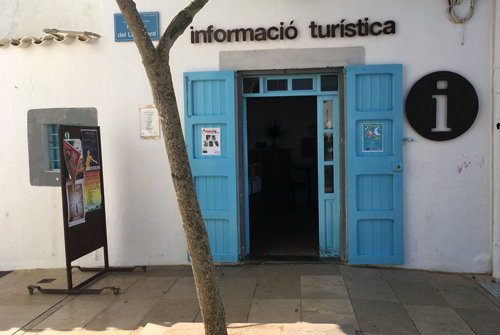 Being the capital of the island, Sant Francesc has two important celebration dates on the calendar.
The first one, on December 3, to celebrate the feast of the town’s patron, San Francisco Javier.
The second of the dates, July 25, to celebrate Saint James, the patron saint of Formentera.

As one might imagine, the celebrations of San Jaime, in July, are massive festivals with the presence of many summer tourists in Formentera who, year after year, attract more public to enjoy the programmed musical performances. 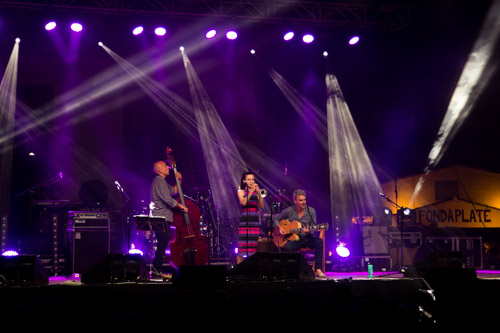 On the contrary, the San Javier festivities, in December, are much more intimate festivals where traditional dances and the celebration of the end of the tourist season lead to a greater participation by the residents of Formentera. 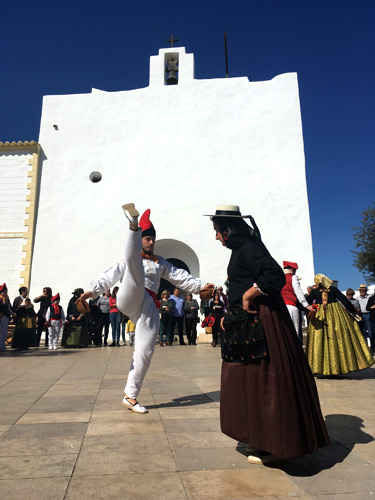 It should be added that, for a couple of years, a Christmas market has been held which, for approximately a month, is installed in Plaça de Sant Francesc and which becomes the social nucleus of the island at a time of year when the leisure offer is rather scarce.
A good way to face winter and Christmas in Formentera.

In the town you will find a wide range of commerce and hotel and restaurant businesses.
From the typical village store that has hardly changed over the years and is open for 12 months to serve the local population, to the clothing and accessory stores that open with the start of the tourist season and close doors with the departure of the last visitor of the summer season.

In the same way, the restaurant offer is wide and varied, with cuisine options from different countries and styles, to restaurants serving traditional Formentera cuisine.
In any case, it should be noted that the offer is wide and varied, and that a walk through Sant Francesc de Formentera is one of the things to do, no matter what, when you are on vacation on the island.

In the capital of Formentera, in the town of Sant Francesc, we can find accommodation in various hostels and hotels but you should know that, any offer of tourist apartments and private accommodation within the urban center of the town, is prohibited since 2019 following the zoning indications tourism carried out by the Consell Insular de Formentera.

Unlike other towns and urban centers of Formentera, Sant Francesc stands out for being active both during the day and at night.
A large number of shops have always existed in the town, but not so the restaurants and bars that, lately, have grown considerably in the pedestrian areas of the center.
Years ago, Sant Francesc was a town that, at dusk, closed almost all its businesses and had hardly any nightlife, but that changed when, in 1994, a group of musicians living in Formentera, Jazz & Co, proposed to the then town hall, play jazz on Saturday afternoons in the church square of Sant Francesc.

A small gesture that meant, little by little, the change of habits on the part of the merchants of the town since they saw that people liked to be until later in their square and streets.
An initiative that, over time, has led Sant Francesc de Formentera to be, today, a town with daytime life and nightlife, on the many terraces of the town’s pedestrian streets.

The group of musicians (not musical group) Jazz & Co. In 2019 he received the Sant Jaume award, the highest distinction awarded by the Consell Insular de Formentera, for his initiative to bring music to the town squares since this same proposal was also taken to Sant Ferran, Es Pujols and La Savina.

In the surroundings of Sant Francesc there are most of the sports facilities managed by the Consell Insular de Fomentera.
If you are one of those who also practice sports on vacation, do not hesitate to contact the sports department of the institution and they will tell you how you can use their facilities.
A covered pavilion, a heated pool, several paddle and tennis courts as well as an artificial grass football field where the only club on the island plays, SD Formentera, which in 2017 gave us the greatest joy to date by eliminating Athletic Bilbao in the 1/16 final of the Copa del Rey that year.

What a long weekend we spent the many fans who came to Bilbao to accompany the team shouting “Amunt Formentera !!!” Unforgettable …. and I hope the Bilbao fans do not take it the wrong way when reading this article, but for us it was something historical.

How to Sant Francesc de Formentera

Getting to the island’s capital is very easy, you can’t get lost.
When you arrive at the island’s port, La Savina, you can get on the L1 or L2 line bus which, at one of its stops, will drop you off at Avenida 8 d´agost, in the town of Sant Francesc itself.

If you intend to rent a car, motorcycle or bicycle, remember that you can use our discount codes at various companies on the island.
Then you should take the main road of the island, the PM-820, and drive, without deviating for 5 kilometers until the entrance of the town of Sant Francesc.

Once there, you should know that parking in most of the town center is regulated by the blue zone and is paid.
Once there, stroll and enjoy its streets, its history, its shops, and sit down to enjoy the placid life in Sant Francesc de Formentera.