Trasmapi is the best shipping company for the transport of people and vehicles on the Ibiza-Formentera route.
Service all year round with the best boats and a greater number of daily departures.
DISCOUNT CODE: 4MENTERA

“Ferry Ibiza to Formentera with the best shipping company: Trasmapi”

Trasmapi Ferry Ibiza Formentera:
Trust, safety and professionalism in their boats and crews.

By accessing any of the promotions and discounts that you will find on this page, the relationship will be established between you and Trasmapi. 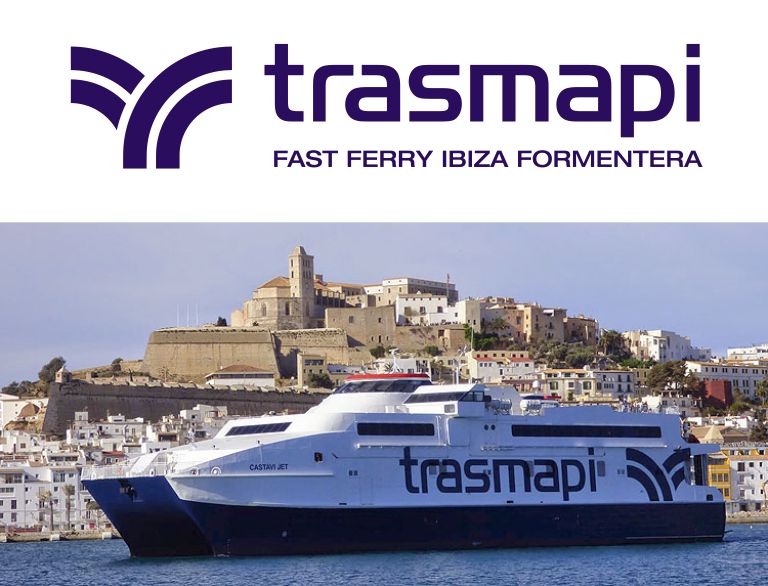 ✅ Maximum punctuality in their schedules.
✅ Crews with many years of experience.
✅ New boats and in perfect condition.

Ferry Ibiza a Formentera with Trasmapi

Although the distance that separates the port of Ibiza from the port of Formentera is not great, approximately 12 nautical miles, choosing a company that guarantees and professionalism is essential to start your vacation in Formentera on the right foot.

A bad choice of the company with unfavorable weather conditions can lead to regret a thousand times for not having opted for a company that offers us fast boats in perfect condition and optimal for navigation.

The different companies that operate the Ibiza to Formentera ferry route are varied and so are their boats and since from this website we only want to recommend what we know works, Trasmapi is our only recommendation.

Trasmapi basically has two types of boats.
Ferries for passengers and some motorcycles and ferries with mixed cargo transport, that is, passengers at the same time as cars and motorcycles in their warehouses. 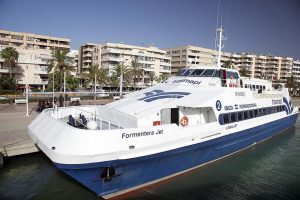 All of them with Jet system, ferries that cover the Ibiza Formentera route in approximately 30 minutes and all of them with the maximum comforts during navigation.

From 4mentera.com we recommend the advance online purchase of your ticket with Trasmapi for several reasons:

– Better price than at the box office

The price of the ticket purchased online is lower than the price purchased at the port ticket office or on board any of the ferries.
Buy online, it will be cheaper.

In addition, if that weren’t enough, we can offer you a valid promo code on their website to buy the Ibiza Formentera Ibiza route even cheaper.
Use the promotional code 4mentera and you will get an added discount.

The longer the time prior to the departure of the ferry, the greater the discount applied.

When buying your tickets online for the Ibiza Formentera Ibiza ferry with Trasmapi you have the possibility of not setting a departure time for your tickets and opting, for the same price, for the OPEN option.

In this way, when you arrive at the port, you can take the first Trasmapi ferry that leaves. That simple.

As if that were not enough, tickets purchased online and with the OPEN option are valid for one year, so if you decide to delay your departure or return, don’t worry, your Ibiza Formentera ferry tickets or the Formentera Ibiza ferry will remain valid. for the next 12 months.

– Bus from Ibiza airport to Ibiza port, for free

And all this for the same price of the Ibiza Formentera Ibiza ferry, although you have to mark this option during the ticket purchase process.

– One way or better round trip with Trasmapi?

Our recommendation is that you buy roundtrip online, since many of the economic and service advantages that we are talking about are only given with this purchase option.

But taking into account the OPEN option, and the frequency of daily routes offered by the company, you are not tied to any type of tie to save something, on the contrary, you will see that you are winning in many aspects.

One of the virtues to take into account when we talk about Trasmapi is the professionalism shown by its crews and company managers since the cancellations of journeys are something that never usually happens except in cases determined by the Port Authority in the closure of ports Because of the bad weather.
With Trasmapi you can be sure that if you can navigate, they will navigate and will cover the route between the Pitiusas.

Just as the airlines all fly with the same type of plane or similar, the same does not happen in the shipping companies and, sometimes, buying the cheapest ticket we find leads us to get on old wooden boats that take forever to cover the Ibiza Formentera route.
Tight and uncomfortable to save us a couple of euros by not having chosen a shipping company like the one we recommend here.

Whoever writes these lines is a resident of Formentera and like most of my neighbors, if you ask us about a shipping company to travel with, the answer will be common to almost all of us, Trasmapi.

Because it offers the best schedules, because its boats are always in the best conditions, because its crews are very prepared and, very important, because they rarely cancel their departures and if they do, it is due to a major cause.

With this last statement we do not want to question the work of the rest of the shipping companies, but as a resident of Formentera all year round, summer and winter, we experience situations that lead us to affirm that Trasmapi is the company that generates the most trust among the people of Formentera and Ibiza and that is why it is the only one that we recommend from 4mentera.com

Trasmapi: Seats on the upper deck

The crossing between the two islands lasts approximately 30 minutes and if the sea conditions are good, my recommendation is that you go up to the upper outer deck of the boat and enjoy the views that you can enjoy during the journey.

The number of outside seats is relatively small, so if you intend to go up and sit in one of them, ask the sailors what is the access to the upper deck and secure a place before they are filled by the rest of the passengers.

During the journey with Trasmapi

When leaving the port of Ibiza in the direction of Formentera, the walled city, Dalt Vila, will impress you with its majesty and beauty, for this reason, and for the good conservation of the walls, it was named a UNESCO World Heritage Site.
Have your smartphone camera ready because the image of the walls with the large yachts moored in the port of Ibiza is a photo that well deserves to be taken.

Once we leave the port of Ibiza, the ferry will sail south, leaving to port and starboard the different islets that dot the crossing.
If there is a group of especially well-known islets, those are “Es Freus”, with the Es Penjats Lighthouse as a light reference warning sailors of the most treacherous passage for navigation between Ibiza and Formentera.

Even if you don’t see it from your armchair, inside or outside, the depth of the sea in this strait is considerably reduced. This can affect the state of the sea and the currents and find in this section of the trip, the sea a little more rough.

Once we leave Es Freus behind, heading towards Formentera, we will see to starboard, the Faro den Pou, and the north end of the Esplamador islet with the defense tower on its cliffs that guarded the arrival of pirates to the coasts of Ibiza and Formentera during the 18th century

Arriving to Formentera with Trasmapi

Leaving Espalmador behind, we will begin to see a thin line of sand that rises slightly above sea level. That will be the first image you will have of Formentera in its northern part, the end of Illetes beach.

The navigation will continue to see the thin silhouette of Formentera in this part of the island, and with the appearance of the occasional boat at anchor enjoying the crystal clear waters of the Ses Salines Natural Park, until reaching the port of La Savina, ending the journey and starting your vacation in Formentera.

The Trasmapi company has always been a pioneer, among the shipping companies of the islands, in the introduction of offers and discounts so that the tickets are a little cheaper.

Among these Trasmapi initiatives are the promo codes, or discount codes or if you want to call it offers on the Ibiza Formentera ferry.
That is why thanks to the collaboration with 4mentera.com they offer you the possibility of buying your ferry ticket Ibiza – Formentera – Ibiza with a discount.

The final price and the discount applied depends on the advance with which you make the online purchase.
The longer in advance, the greater the discount, so you better check for yourself the discount that is applied to you today for the date of your vacation in Formentera.

Do you want to buy your Ibiza Formentera ferry ticket now?

Click on the following link and it will redirect you to the Trasmapi website with our promo code already inserted so you can check prices.